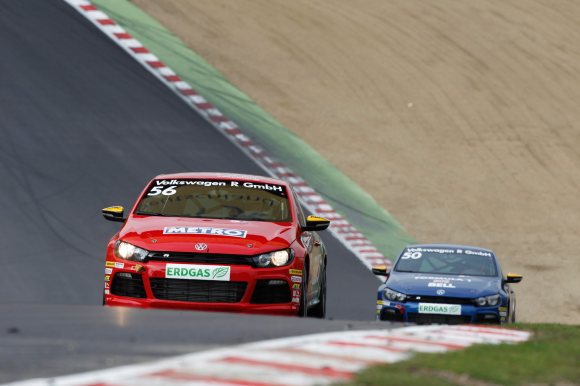 Five-times Le Mans winner Derek Bell is making excuses. “I’m not going to make excuses, but…” he starts, “I flew in from San Francisco two days ago and I’m still jet lagged. And I thought I’d lost my credit cards this morning. I’m a bit frazzled.”

The Volkswagen Scirocco R Cup has just had its half-hour practice session and Bell is the 23rd name on a timing sheet 24 cars long. Metro is 22nd.

Not being last when you have never raced anything bigger than a 100cc go-kart, and you’re taking on series regulars plus four ex-F1 drivers – Bell, Johnny Herbert, Martin Brundle and Mark Blundell – is, in my book, a solid result.

The learning curve on this is so steep I could use ropes to climb it. A week ago I did a dozen laps in the 271 horsepower gas-powered Scirocco in Oschersleben, Germany, which, along with a theory test and a medical from Robert Kubica’s doctor, was enough to earn me my race license.

I take to the track for the practice session, strapped in tightly, aware of Brands Hatch’s reputation. In the last twelve months, surely this has proven the most dangerous race track in the world. It looks beautiful soaked in the summer sun, rolling asphalt, grass greener than Wimbledon’s, but that lady in Goldeneye looked inviting too and she could break a man’s spine with her thighs.

I also fret that my rivals know the 1.929km course so much better than me. After all, 20 percent of the track surface is made up of Johnny Herbert’s bone fragments.

Inside my red and green car, a thick roll cage, a few toggle switches, digital console, a wrap-around race seat and fire extinguisher confirm this is a proper racing machine. The gears are paddle-shift. The large bio-gas tank behind the seat looks a bit like an immersion heater (VW claims this is the most eco-friendly one-make series in the world). The engine growls hungrily. The steering wheel has a little red button on it. This is the push-to-pass booster. In each session we’re allowed 15 ten-second blasts of an extra 50bhp.

My best practice lap is 2.6 seconds off the pace, but quicker than Bell’s and one of the Pro Cup drivers (there are four categories – Pro, Junior, Legend, and in my case ‘Lucky B*****d’).

Because it’s front-wheel-drive and most of the weight is on its front axle, the rear end gets very loose under braking. To get a good lap time I would have to boot the brakes harder, but it’s finding the confidence.

I visualize the perfect qualifying lap over and over in my head. Using the boost button twice per lap, they don’t last long and in the first half of the session traffic is so bad that I’m getting nowhere. Later in the session, the traffic clears and I really start to thread good laps together but with no push-to-pass left I find myself ranked 22 once again – one place ahead of Bell. My pace was now 1.8 seconds off pole, but I know I can go a lot quicker still.

We’re called to what Brundle describes as “the scariest drivers’ briefing I’ve ever been to”. We’re shown video of all the crashes from the season. It’s a bit like watching footage from Lockerbie before getting on a plane.

With this in mind, I decide on a strategy – take it easy through Turn 1. Starting near the back takes some of the pressure off. I get a little wheelspin off the start line but stay ahead of Bell. One driver overdoes it through the first corner and ends up in the gravel, prompting the Safety Car.

At the restart I find myself tucked up behind a Pro racer. Brands’ Indy circuit is almost impossible for overtaking. Derek Bell, though, manages to get his car between the two of us and snatches position from the Pro driver around the outside of the hairpin. I follow him through in hot pursuit.

If I can beat Derek Bell MBE then it ain’t a bad debut, I tell myself. I make my move at the infamous Paddock Hill Bend. This is where I’ve been losing speed to the others. Under braking it feels like someone’s put your bowels in a blender. The car squirms left and right before you point it at the inside kerb and hope the tail doesn’t slide to the left too much.

I hold my breath, brake later, turn in, take position, and mop my brow as I straighten up. Mission accomplished.

From there, I’m able to pull away as I’m much quicker than him in the second sector. But so is everyone. The short lap means that soon I have the leaders bearing down on me. Blundell flashes his lights and whips past me. All the Legends are driving blue cars, and I don’t want to make the mistake of letting Bell back through.

I take the chequered flag ahead of him in 21st place. While I might not have been on the podium I claimed a good scalp for a first effort. I’m starting to wonder whether this Le Mans lark might be within my grasp.