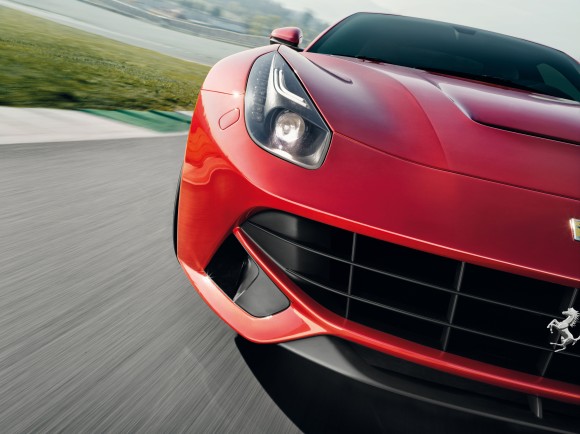 Ferrari’s F12 will hit 100km/h in the time it takes to read this intro, writes Adam Hay-Nicholls.

Cover your ovaries. Each time this car revs past 5,000 it makes every woman within earshot pregnant.

The F12 Berlinetta is the fastest and most powerful road-going Ferrari ever built. The thrill of its V12’s roar, the acceleration that pushes you back in your seat, the 730 horsepower scrambling for grip as you flick up each of its seven gears; these things always excite, and that’s the raison d’etre of any supercar, yet perhaps the most impressive thing about Ferrari’s range-topper is how versatile it is at slow speed.

With the transmission set to Auto, I prowl through the thick inner-city traffic like a cheetah versed in the Highway Code. The engine note is hard to detect. The ride is as smooth as a sax solo. The super-sharp steering helps me dart into gaps, surprising other drivers who didn’t hear the beast coming. Only its protracted turning circle lets it down from being the perfect urban GT.

Its exterior styling is a well-judged balance of aggression and elegance. With its long bonnet housing a whopper of an engine and the two-seat cabin set on its hindquarters, its silhouette is more muscle car than the mid-engined UFO-like offerings from Lamborghini, Pagani and Bugatti. It’s a bang up-to-date re-mastering of the rakish 275 and legendary 250 GTO, which enjoyed bedroom poster space in the 1960s. Compared to the 599, the car the F12 replaces, it is much more compact, angularly handsome and looks more than a generation newer. In fact, it makes the 599 seem flabby, uncouth and a decade old.

Pininfarina contributed alongside Ferrari’s own studio. It’s one part 458 Italia, with its kerb-hugging low-down lines and middle-finger rear-end, and two parts FF with its swept back cabin and grinning front grille, albeit more fierce and purposeful. In fact, while I considered the FF admirably daring when it was unveiled, the F12 switches on the house lights and reveals the shooting brake’s pitfalls. The F12 is what a front-engined Cavallino Rampante should look like: as fast as a jet fighter, as sexy as a Victoria’s Secret show, and unmistakably Maranello-born.

From the comfortable driver’s seat you can see the aero bridges on either side of the bonnet, funneling air to keep it pinned to the tarmac; wind tunnel innovations like this mean the car is unsullied by a rear spoiler. In fact, downforce has increased a bewildering 76 percent over the 599, largely thanks to its substantial rear diffuser.

The central console is simple with no LCD screen. Instead, either side of a big yellow rev counter parked at the centre of the instrument binnacle are two digital screens; to the left the speedo among other functions, to the right the sat-nav. The steering wheel is the main function tool, with the now ubiquitous F1-inspired Manettino dial to flick through different traction settings (safe, normal, scary and certain death) and a selection of rubberized push and pull buttons governing the indicators, wipers, lights and suspension settings. There’s also a red engine start button, which gives a glorious bark when pressed, and shift paddles just a finger-flick away. The dash is sandwiched in two-tone leather with a grey aluminium filling and a silver Ferrari name badge. The central console features a restrained layout of climate control buttons, and atop the dash you have a row of circular vents that mimic the five-spoke alloys the car sits on. Behind the seats you have a luxurious and large leather luggage rack and plenty of additional space in the 500 litre boot, so the car is perfect for a cross-continental dash, packing enough supplies for a week at the villa.

Once out of town it’s time to feel the F12’s real talents. Squeeze the throttle more than an inch and 12 cylinders ignite with the sound of Al Pacino psyching himself up: “HOO-AH!”

The power, so restrained at low revs, is eye-watering when you put the hammer down. Seven hundred and 30 horses. That is just 20 shy of a Formula One car. It weighs 1525kg, which is obviously more than twice an F1 car but by GT standards this is supermodel lean. It’s 80kg lighter than the 599 GTO – the wildest (and wildly expensive) 599 derivative – and 59bhp beefier. The Aston Martin Vanquish has 565bhp, the McLaren MP4-12C 616, the Lamborghini Aventador 690, and the Pagani Huayra 720, so the Berlinetta has its rivals pegged.

At 100km/h it’s barely limbering up. Two hundred km/h from standing arrives in just 8.5 seconds, which is astounding given it feels much more grown up than its stable-mates from Emilia-Romagna. It tops out just beyond the 340km/h marker. Depending on the application of your right foot, 730 Italian stallions can easily spin the rear wheels in all seven gears but the back end is rarely unsettled and easily controllable. The sensation, nevertheless, gets your heart thumping like John Bonham’s sticks.

The carbon ceramic brakes make it pretty difficult to hit anything. The clever bit is active brake cooling, which opens veins to the cooling ducts at high operating temperatures to reduce drag.

The fact that it’s so much more eye-catching than the 599 and FF, and rarer than the 458 means that every other motorist and every passerby stares at it agog. Some of us are extroverts at speed, but at standstill we’re shy and the attention a red Ferrari inevitably brings can start to feel uncomfortable. In Monaco you’ll be fine. In Mogadishu you might not be.

In the space of two days the Ferrari and I were hauled over by the cops three times, not for speeding but for paperwork, breathalyzer tests, checking the glove box for cocaine and WMDs, you name it.

I loved the car but I hated that it cost more than my rent to fuel, was terrified the jealous would key it, and grew tired of being a flic-magnet. All of this is moot of course if you have 24-hour security, shares in Shell and enough influence to discourage the gendarmes. It’s quite likely that the F12’s prospective clientele has all of the above. Therefore, there isn’t really a downside to the Berlinetta but, for most, it will and should remain the ultimate dream car.