Asia Tatler: Alfa Gets Its Groove Back 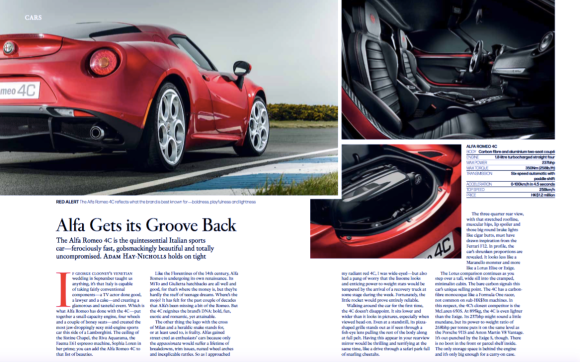 If George Clooney’s Venetian wedding this past September taught us anything it’s that Italy is capable of taking fairly conventional components – a TV-actor-done-good, a lady lawyer and a cake – and creating the most glamorous and tasteful event ever to find its way onto the web pages of TMZ.

In the case of the Alfa Romeo 4C, the Italians have taken a small-capacity engine, four wheels and a couple of boney seats and created the most jaw-droppingly sexy mid-engined sports car this side of a Lamborghini. The ceiling of the Sistine Chapel, the Riva Aquarama, the Faema E61 espresso machine, Sophia Loren in her prime; you can add the Alfa to that list of beauties.

Like the Florentines of the 14th Century, Alfa is undergoing its own renaissance. Hatchbacks like the MiTo and Giulietta are all well and good, for that’s where the money is, but they’re hardly the stuff of teenage dreams. Where’s the mojo? It felt like Alfa was missing a bit of Romeo these last couple of decades. The 4C reignites the brand’s DNA: bold, fun, exotic, romantic yet attainable.

The other thing the logo with the cross of Milan and a heraldic snake stands for, or at least used to, is frailty. Alfa’s gained street cred as enthusiasts cars because only the ‘appassionata’ would suffer a lifetime of breakdowns, trim issues, rusted wheel-arches and inexplicable rattles for those little bursts of joy. So, as I approached my glimmering red 4C, I was wide-eyed with excitement but I also sensed a pang of worry that those lissome looks and its enticing power-to-weight stats would be tempered by the arrival of a recovery truck sometime that week. Like a catwalk model on a hospital gurney, cool attitude would give way to panic in an instant. Fortunately, it would prove entirely reliable.

Walking around the car for the first time without the make-up of motorshow lighting, the 4C doesn’t disappoint. It sits lower and wider than it looks in pictures, especially when viewed head-on. Its pizza-shaped grille stands out with the rest of the body pulled behind it like it’s at full pelt and staring down a frog-eye lens even at standstill. Having this arrive in your rearview mirror would be thrilling and terrifying at the same time, like a drive through a safari park full of snarling cheetahs.

The three-quarter rear view, with that stretched roofline, muscular hips, lip spoiler and those big round brake lights like cigar butts must have drawn inspiration from the Ferrari F12. In profile, the car’s shrunken proportions are revealed. It looks less like a Maranello monster and more like a Lotus Elise or Exige. The Lotus comparison continues inside as you step over a tall, wide sill into the cramped minimalist cabin. The bare carbon, though, signals this car’s USP. It has a carbon monocoque just like a Formula One car, weighing just 65kg. Carbon-fibre tubs are not commonplace on sub £200,000 machines. In this respect, the 4C’s closest competitor is the McLaren 650S.

At 895kg it’s even lighter than the featherweight Exige. The only storage space is behind the engine and it’s only big enough for one carry-on case. Inside, it’s as driver-focused as a competition cockpit but the details are aimed at the kids. The digital instruments are very Need For Speed, but the badging tells you you’re in a real Italian stallion and the simple leather pull-handles for the doors indicate this car was bred for the Mille-Miglia, not the motorway. Soundproofing gives way to weight-saving, meaning that inside with the throttle down the acoustics are like that of a sheep trough – tinny and unpleasant. For eyewitnesses, though, as they watch those silver phone-dial alloys spin away, the sound is glorious.

This car is rare. One of the most hotly anticipated cars of the past year, motoring journalists have been queuing round the block to get their hands on it and there haven’t been enough press cars to go around. You might suppose that Italy would be its natural habitat, but there are still only a few cars to serve the whole land. Instead, I sought an invitation to Ireland and discovered my Italian-plated ride sat on an industrial estate in Dublin. My mission, over the coming days, would be to blast to the west coast to the remote green and rocky reaches of County Kerry and its cliff-hugging Dingle Peninsula – one of the best places in the EU to test a pocket rocket and one’s heart around the blind and narrow bends.

But while an enthusiastic driver will relish the workout these roads give, the Emerald Isle’s reputation for badly surfaced roads is right on the money. The potholes here are enough to break your wrists. Gravel threatens to send you into a hedge whenever you squeeze the gas mid-corner, and that’s just in an ordinary family car. How would the 4C fare?

You need to be alert. With 60 percent of its weight over the rear wheels the Alfa is surprisingly well planted, but the steering will try and free itself from your grasp over bumps and dodgy cambers. Under heavy braking the car pulls one way or another, like a dog darting towards different lampposts. There’s no power steering either, which means you’ll need to swallow a can of spinach before attempting a three-point turn.

Put the car on ‘dynamic’ setting and the dashboard instruments turn from cowardly yellow to satanic red, and the throttle response feels like a track car. The handling on smooth roads is sensational, and just like a Lotus – the benchmark for lightweight chassis design – it grips, it communicates and it rewards.

It feels just like a Group B rally car, where being uncomfortable is written into the technical regulations. Sure, I might need to visit a chiropractor after returning the 4C, but it’s a small price to pay. Italian engineers are the hardest driving of all, and they’ve got this one well fettled. It’s wild, but not too wild. You have the satisfaction of taming the beast.

The Porsche Cayman is much easier to live with. It has no annoying traits. It handles just as well, is easier to drive and is just as quick. The build quality is superior. I’d argue that it’s better value. But while the Porsche is handsome and elegant, it doesn’t feed the soul in the same way. And that is why, for all its foibles, I love the 4C. The imperfections make the good bits stand out all the more. I love the way it looks and so does everyone else.

People went mad for it, like an alien had landed and started handing out lottery tickets. This car is a rockstar; its talent and stage presence overshadow all the bad habits we would expect from an uncompromised Italian coupe. Alfa Romeo have taken a traditional family recipe, rich in their values, made with passion, and served it up to a new generation.