Asia Tatler: Back to its Roots 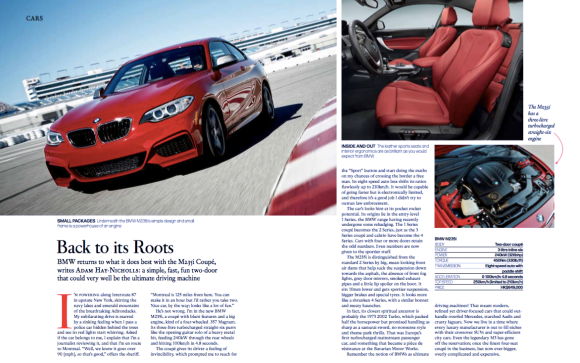 BMW returns the company to what it does best with the M235i Coupe , writes Adam Hay-Nicholls: a simple, fast, fun two-door that could very well be the ultimate driving machine.

I’m powering along Interstate-87 in upstate New York, skirting the navy lakes and emerald mountains of the breathtaking Adirondacks when I pass a police car hidden behind trees and see its red lights start whirring. Urgh, that sinking feeling.

Asked if the car belongs to me I explain that I’m a journalist reviewing it, and that I’m en route to Montreal. “Well we know it goes over 90, so that’s good,” offers the sheriff. “Montreal is 125 miles from here. You can make it in an hour but I’d rather you take two. Nice car by the way, looks like a lot of fun.”

He’s not wrong. I’m in the new BMW M235i; a compact coupe with blunt features and a big engine. Kind of a four-wheeled .357 Magnum. Its 3.0 litre turbocharged straight-six purrs like the opening guitar solo to Alice Cooper’s Poison, feeding 332bhp through the rear wheels and hitting 60mph in 4.8 seconds.

The Beamer gives its driver a feeling of invincibility, which prompted me to reach for the Sport button and start doing the maths on my chances of crossing the border a free man.

Its eight-speed auto box shifts its ratios flawlessly up to 130mph. It would be capable of going faster but is electronically limited, and therefore it’s a good job I didn’t try to outrun law enforcement.

The car’s looks hint at its pocket rocket potential. Its origins lie in the entry-level 1-Series, the BMW range having recently undergone some re-badging. The 1-Series coupe becomes the 2-Series, just as the 3-Series coupe and cabrio have become the 4. Cars with four or more doors retain the odd numbers. Even numbers are now given to the sportier stuff.

It’s distinguished from the standard 2-series by big mean-looking front air dams which help suck the suspension down towards the asphalt, the absence of front fog lights, grey door mirrors, smoked exhaust pipes and a little lip-spoiler on the boot. It sits 10mm lower and gets sportier suspension, bigger brakes and special tyres. It looks more like a shrunken 4-Series, with a similar bonnet and meaty haunches.

In fact, the closest spiritual ancestor of the car is probably the 1973 2002 Turbo, which packed half the horsepower but promised handling as sharp as a samurai sword, no-nonsense style and theme park thrills. That was Europe’s first turbocharged mainstream passenger car, and something that became a pièce-de-résistance at the Bavarian Motor Works.

Remember the notion of BMWs as ultimate driving machines? That meant modern, refined, yet driver-focused cars which could out-handle overfed Mercedes, starched Audis and crusty Jaguars. Now we live in a time where every luxury manufacturer is out to fill niches with their crossover SUVs and super-efficient city cars. Even the legendary M3 has gone off the reservation; once the finest four-seat coupe in the business, but now ever-bigger, overly complicated and expensive.

The M235i is a BMW for the purist. It’s beautifully engineered but Prada-simple, the approach: less-is-more. That straight-six is like the French fries on someone else’s plate – you can’t help going back for another helping.

This isn’t a full-fat M-car. It is an M Sport car, which is to say it has been breathed on but it isn’t a boiling hot performance car. If the 228i Coupe is Premium Economy this is Business Class, while the M4 is First Class and with the price tag to match.

Excessive weight is one of BMW’s modern issues. Much of it is the result of necessary safety equipment – all of those air bags, side impact bars and electronics – but some is self-imposed in the pursuit of luxuries such as the optional 16-speaker Harman Kardon surround-sound stereo system. You can’t have it all. The M235i comes in at under 1,500kg, which is lean compared to the rest of the range.

Inside, the ergonomics are typically BMW-brilliant, the leather sports seats comfortable and supportive, the sat-nav screen with its 3D skyscrapers large and informative, the rear seats a little grumblesome for anyone over 5ft 10in but better than a two-plus-two. In my Estoril Blue car I had a black fascia inlaid with almost feline-looking dark wood and rather fetching brown leather seats.

I kept the car in Auto most of the time, rarely using the paddles as they have too little travel. The sensation is too electronic, not mechanical enough. It feels remote, like a PlayStation. The six-speed manual’s character is probably more in keeping with this car’s throwback character, but the eight-speed automatic’s changes as so fast and effortless that it’s a wonder. With the auto, you shave a tenth of a second off the manual’s zero-to-sixty sprint, which is unusual. It’s also a worthwhile investment come re-sale. I did, at times, yearn for a stick shift though.

The traction control is a little too nannying, so when presented with a dry twisty road I selected ‘Sport Plus’, which turns off the Electronic Stability Control and signs over the majority shareholding to your right foot.

Overall, the M235i is much more practical than a Porsche Cayman, just as well built, and almost as good dynamically. It’s ahead of the offerings from Merc and Audi. It’s a Jack Russell terrier; a small but relatively muscular and confident dog that’ll stare down bigger breeds and yelp and jump for attention.

The BMW is an ideal real-world performance car: It can carry a family of five, it’ll fit in small parking spaces, and has enough room in the boot for a couple of suitcases or a fortnight’s shopping. It cruises smoothly and economically, and when you want to have fun you’ll savor the sublime handling and capable sweet-sounding engine. All that for HKD$649,000.

Best of all it’s got a young soul. It doesn’t feel too grown up or compromised in any way. The M235i is a college kid with the world ahead of it, and just the right balance of book swatting and an appetite for parties. It’ll be well behaved and thrifty when touring down the motorway, and it’ll stay up all night, flirt and drain the barrel when blasting down a country lane. It’s exactly the kind of all-rounder coupe BMW were always good at and should graduate with honours.