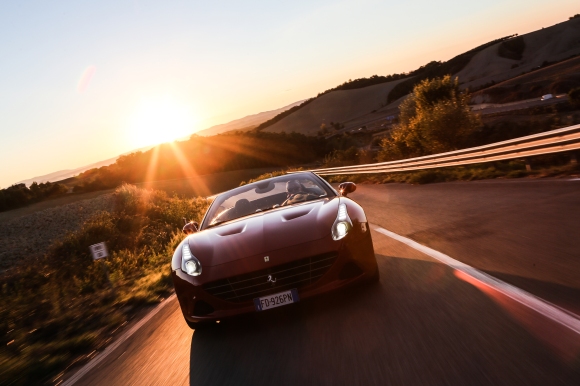 A trip to Tuscany in a Prancing Horse shows Ferrari still evokes an almost spiritual passion in its homeland, writes Adam Hay-Nicholls.

A zesty yet smooth and powerful red. That’s how vintners are hailing Tuscany’s 2016 crop, but it also describes Ferrari’s entry-level roadster, the California T. A visit to the region’s wine harvest becomes all the more bacchanal when made behind a steering wheel bearing the famous prancing horse. How could I refuse the chance to experience the very best Italy has to offer?

Italy has always pushed the boundaries of design, focusing on modernity but never forgetting ancestry. Heritage and romance are always in the blend when it comes to Italian state-of-the-art products. The futurist can be neighbours with the medieval with surprising serenity.

Every detail on the Ferrari California T looks bang up-to-date, yet there are several subtle retro nods to the 250GT California which inspired it. This Sixties spider was, for the jet set of that most glamorous decade, the ideal summer sports cruiser. The lineage is easily traced. This is a Ferrari built for leisure, not racing. Parked in the shadow of the Castel Monastero, the 11th Century monastery turned £580-a-night hotel of which I’m a guest, this 21st Century reboot looks perfectly at home.

A Ferrari is not only about speed and noise, which it delivers with nonchalance, but about how it makes you feel. My trip to Tuscany was to indulge in Chianti and Montalcino’s finest food, wine and lodgings, and to savour a lifestyle that is best accompanied with a Ferrari key in one’s chinos.

Sunset prompted the end of my spa session and it was off to re-tox at the cosy and rustic La Bottega Del 30, tucked away in a nearby hamlet. Our nine course menu, which included tongue served in a can and a taste-exploding spinach and ricotta raviolo in truffle sauce, into which the diner whisks a raw egg yolk, illustrated why chef Helene Stroquelet has earned her Michelin star.

Having awoken in the Castel Monastero’s turret suite under wooden beams and a fresco of the local landscape, I fired up the California T’s V8 for the first time as the electric roof disappeared into its boot. I had been given a ‘road book’ by my friends in Maranello, detailing a route which would finally deposit me in Siena.

For the first part of the journey I was joined by a journalist from Chinese GQ and off we set down the country lanes. The roar from the exhausts is addictive, the brakes eye-bulgingly reassuring. More so than any other Ferrari, the California T’s electronic controls make it almost impossible to lose control, but the clever traction wizardry gives you a sense of being, if not on the edge, then within the postcode of Scarytown. This equals smiles for both the driver and the health and safety executive.

Nevertheless, not everyone was happy. After 15 minutes of enthusiastic helmsmanship I checked my passenger wasn’t alarmed. “Actually I suffer from motion sickness and I think I’m going to throw up”, came the reply. Oh dear, the choice of bumbling around switchbacks in a Ferrari at 30 or caking this handsome interior in vomit. A rest stop seemed a good idea.

We rolled through the gates of ‘La Ferdinanda’, the Medici dynasty’s hunting villa. Well, one of them anyway – they owned 23 properties in Tuscany. The Medici’s made their money in banking, just like so many of Maranello’s customers since. In fact, they were the bankers to the Pope and, in 1600, La Ferdinanda was completed. It is known as ‘The Villa of 100 Chimneys’, though there are actually ‘only’ 56. It features frescoes by Ferdinand Pacheco, some of which are scarred with bullet holes from when the Nazis were resident. Caravaggio’s Medusa used to hang here, before being transferred to Florence’s Uffizi, and Leonardo da Vinci designed some of the more innovative kitchen facilities.

I had plenty of time to learn all this for as I swept along the Medici’s drive something sharp punctured my Ferrari’s tyre. Fortunately our support crew had the wherewithal to give me an F1-style pitstop.

Back on the road the Cali T thunders past vineyards, olive groves, and cypress trees which look like giant asparagus. We reach the Antinori winery, one of the biggest producers of Chianti. Their wines are a complex mix, not unlike the California’s V8 and the turbo that lends the T to its name.

Here, locally-sourced materials and a commitment to sustainability have been used to create the most impressive looking winery I have ever seen; almost invisible on the hillside is this modernist factory which is both eye-catching up close and at one with the environment. Vines grow on the staggered roofs while the rust-coloured architecture mirrors the fertile earth. If Stanley Kubrick and Sir Ken Adam had wanted to ferment grapes this is what they’d have sketched. It is designed not only out of respect for the land and its history, but the future of Chianti and the pleasure of drinking it. In the heart of the building above hundreds of wooden barrels are large suspended glass boxes; private tasting rooms where, just like the Ferrari, heritage is enjoyed in the most modern and privileged way.

It’s a commitment to the next several hundred years of winemaking and a startling £90 million investment that has been spearheaded by the effortlessly distinguished Albiera Antinori, with whom I share a 2kg t-bone steak and a 2011 Peppoli Chianti Classico at Cantina Antinori, set among the vines. She and her three sisters are the 26th generation of their family to have presided over the Antinori vineyards, which were establish over 600 years ago.

A wine tasting Ferrari tour is made possible thanks to a shuttle bus to take me home after our session with the sommelier, and then on to dinner in historic Siena. ‘White Night’ at PorriOne, down an alley from the Piazza del Campo, translates as a tasting menu of raw local ingredients and vino blanco. Of the six gourmet dishes the highlights that linger were tagallini with pesto and raw oysters, and the palette-cleansing mascarpone ice cream drizzled with olive oil and coarse sea salt. I make a note to start whipping that one up at home.

The following morning, when rumbling down the cobbled streets of medieval Asciano, young girls and old men flock around our Ferrari motorcade slack-jawed. It is remarkable how Enzo’s cars enduringly instil pride and passion from every generation and social strata in Italy. Yes, they’re eye-catching everywhere, but in Italy it feels closer to the core.

They say Ferrari is a religion, so I thought I’d survey some Benedictine monks. The Archabbey of Monte Oliveto Maggiore was founded in 1313 as the mother-house for the Olivetans. Today there are 500 monks praying, working and studying here, between ages 22 and 96. The silver-haired Dom who showed us around kept glancing back at the California, but there’s plenty here to keep aesthetes occupied, not least the 16th Century cloister frescoes by Sodoma. One wonders how he got his nickname? His depictions of biblical buttocks go some way to explain.

Our open-top convoy blessed, we continued to Brunello, Montalcino. The hilltop town, famous for its Sangiovese grapes and Pecorino cheese, bound by fortified walls and watched over by a fortress, is where we lunched. Then we blasted across the badlands to the renaissance utopia of Pienza. The creation of humanist Enea Silvio Piccolomini, who later became Pope Pius II, Pienza boasts the best views in all of Tuscany from its position atop the Orcia Valley.

For the final stretch it was time to see what the Cali T is capable of. The car I drove was the latest ‘Handling Speciale’ model, which comes with chassis upgrades to make the driving experience a little more edgy. Zero to 60mph remains 3.6 seconds and top speed 196mph, but it’s a little throatier-sounding and extra-precise round the bends. At £160,000 this is a prancing pony – the first rung on the ever-raising Ferrari ladder – but it has the pace to merit thoroughbred status.

Should you want something a little more special without having to go faster, Ferrari’s Tailor Made department will be happy to make your California’s materials and styling bespoke, raising the price by, on average, 20 percent.

We dined ‘a casa’ on our final night in the Castel Monastero’s vaulted and ancient wine cellar. The chef, Stylianos Sakalis, uses strictly Tuscan products and stand-outs among our generous spread included papa al pomodoro (Tuscan bread soup) and saffron risotto with wild boar ragout. The menu is overseen by none other than Gordon Ramsay, himself a Ferrari VIP customer.

Not that they’re on speaking terms anymore, but I was in Marcus Wareing’s kitchen at The Berkeley recently (Masterchef judge Wareing was once Ramsay’s protégé) and he was waxing lyrical about the California T, which he’d had on loan. “Ferraris are like fine wine,” he enthused, “they improve with age. Yet, like a restaurant, they also have to evolve to keep up with innovation, culture and tastes. What I really like about the Cali T is it covers every base.”

From the land of fine wining, dining and living; the Ferrari California T is the perfect recipe and the ideal supercar entrée.