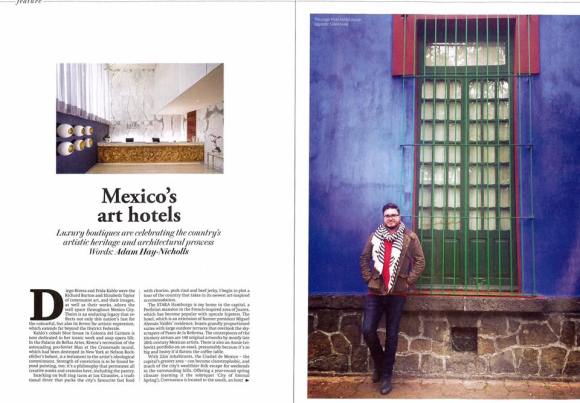 Diego Rivera and Frida Kahlo were the Burton and Taylor of communist art, and their image, as well as their works, abound the wall space throughout Mexico City. Theirs is an enduring legacy which fuels not only this nation’s lust for the colourful and the crazy but its fervor for artistic expression far beyond the District Federale.

Kahlo’s cobalt blue house in Colonia del Carmen is now dedicated to her timeless work and soap opera life. In the Palacio de Bellas Artes, Rivera’s recreation of the astounding pro-Soviet Man at the Crossroads mural, which had been destroyed in New York at Nelson Rockefeller’s behest, is a testament to the artist’s ideological commitment. Strength of conviction is to be found beyond painting, too; it’s a philosophy that permeates all creative nooks and crannies here, including kitchens and hospitality.

Snacking on bull ring tacos at Los Girasoles, a traditional diner that packs the city’s favourite fast food with chorizo, pork rind and beef jerky, I begin to plot a tour of the country that takes in its newest art-inspired accommodation.

The STARA Hamburgo is my home in the capital; a Porfirian mansion in the French-inspired area of Juarez, which has become popular with upscale hipsters. The hotel, which is an extension of former president Miguel Alemán Valdés’ residence, boasts grandly proportioned suites with large outdoor terraces that overlook the skyscrapers of Paseo de la Reforma. The centrepieces of the six-story atrium are 140 original artworks by mostly late 20th century Mexican artists. There is also an Annie Leibovitz portfolio on an easel, presumably because it’s so big and heavy it’d flatten the coffee table.

With 22 million inhabitants, the Ciudad de Mexico – the capital’s greater area – can become claustrophobic and much of the city’s wealthier class escape for weekends in the surrounding hills. Offering a year-round spring climate (earning it the sobriquet ‘City of Eternal Spring’), Cuernavaca is located to the south, an hour and a half’s drive from the metropolis. Its 16th century Franciscan cathedral dominates the vista and its high buttresses cast shadows across the bustling food and drink market below. To the outer reaches, close to the Pyramids of Teopanzolco, large Spanish-style mansions are hidden behind impenetrable walls and solid gates. Many of Mexico’s most important politicians and business tycoons keep sizeable bolt-holes here, while well-heeled visitors opt for the charming Anticavilla hotel.

A restored 400-year-old Jesuit convent, its 12 minimalist suites are themed according to different 20th century Italian painters. For example, one has a reproduction Modigliani nude covering an entire wall; a lot more high-brow than your standard on-demand hotel titillation. The angular infinity pool has contrasting tiles and through the overhanging palms sprout pink flora. It’s a David Hockney painting come to life in a latin eden. The calming holistic spa ensures that every blister of city stress is soothed. The most impressive aspect of this gem is the way visionary owner/manager Bartolomea Bazzardi has extended the 17th century colonial hacienda with a high-ceiling open-sided dining room which spills onto the tropical garden. The grey concrete roof, which is reminiscent of the oeuvre of Oscar Niemeyer, contrasts with wood and mirrored walls creating the illusion of vast space and, with the new and old parts of the hotel connected at right angles, we see a unique dialogue of Mexican architecture past and present from the terrace’s white plastic Eames furniture. Somehow, this clash works as beautifully as the Mexican-Italian dishes that emerge from its world class kitchen.

If you’re looking to roast yourself on white sand while the Pacific licks your toes then you’ll need to get a short flight from MEX to Los Cabos, Hollywood’s playground. Just a few miles down the coast from George Clooney’s crib is the most jaw-dropping accommodation on the Baja Peninsula; Mar Adentro.

Seeming to float on the Sea of Cortez (the name is Spanish for ‘offshore’), this ultra-modern hotel is the masterpiece of Mexican architect Miguel Ángel Aragonés. Five towering all-white accommodation blocks feature 205 rooms that rise above glassy saltwater pools and are framed by faux canals. At night, sophisticated lighting changes the resort’s colour and mood, making it feel like you’re aboard a water-born spaceship. Cube-shaped rooms with outdoor Jacuzzis are as minimalist as you’d expect, with electric blinds disappearing to reveal unsullied views that meet the horizon dead-on.

At this final destination, the artistic philosophy is to look solely forward. It reflects a Mexico bursting with creativity, style and ambition. It’s a vision as far away from Donald Trump’s distorted view of Mexico as it’s possible to get

Rooms at the STARA Hamburgo start at £260, while Anticavilla’s rates start at £150 and Mar Adentro £400, based on two sharing. All hotels are members of Small Luxury Hotels of the World. See Slh.com for more details. Information on Los Cabos can be found at visitloscabos.travel.

Aeromexico flies state-of-the-art 787 Dreamliners from Heathrow to Mexico City six times a week, and daily from April 2017, with return fares starting at £636. Business class flights from £2,129 include flat-beds and a complimentary chauffeur service. To book, visit Aeromexico.com