City AM Bespoke: To Infiniti and Beyond 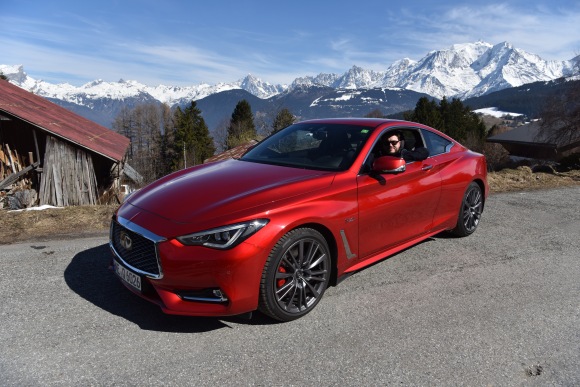 Adam Hay-Nicholls discovers the thinking man’s car brand and explains why it would vote for the Liberal Democrats.

Whenever I touch down at Geneva airport I think back to the time I once flew a rather ambitious itinerary from here; setting off eastbound and circumnavigating the globe, crossing each meridian and clocking 25,000 miles before touching back down in Geneva 58 hours later. Myself and a small crew had taken this round-the-world flight aboard an elderly Sabreliner, which essentially was the first private jet ever built. It was cramped but sporty; a revolutionary aircraft at the time it was designed, in the late 1950s, with wings supplied by NASA.

This time, though, my arrival on the Cointrin apron is greeted by the Infiniti Q60S, a £46,000 coupe boasting similarly jet-set lines, business class equipment and long distance touring capabilities. With 400bhp it has serious grunt, and its Airbus-inspired steer-by-wire technology makes it as state-of-the-art as the Sabreliner was when it first left its hangar.

Software that controls the throttle and brakes is commonplace, but Infiniti are the first car company to apply the same philosophy to steering, just like that of a plane. Electronics send signals to the front wheels rather than using a mechanical linkage. The Q60 has a steering column, but it’s only there as a back-up in case of a catastrophic system failure.

Just as I fondly recall flying low over the snow-capped Alps minutes after take-off, with the Infiniti I quickly dive into the mountains after crossing the French border and get a feel for the Q60’s novel steering around the twisting alpine roads, selecting different dynamics at the flick of a switch. The destination is Manigod, a pretty village and winter ski destination where I’ll hole up in a cozy auberge, imbibe the fresh air, and drown myself in Savoyard cheese.

Infiniti is to Nissan what Lexus is to Toyota. It is the Japanese company’s luxury marque and while its cars have been popular in the US for nearly 30 years it’s been seen in Europe for less than a decade. Since 2010 there has been a strategic cooperation with Daimler, helping to tune and spec the cars to European sensibilities. Unlike other car makers, Infiniti doesn’t draw on its nationality; it likes to be seen as a global car maker, with its HQ in Hong Kong and design centres in San Diego, Beijing, Japan and, surprisingly perhaps, Paddington. So, they’re very much designed to be cars for the world, and with 215,000 cars sold in over 50 markets last year they’re meeting big targets.

What it’s still working on, though, is the brand’s personality and that’s finally starting to take shape, partly through its involvement in Formula One and thanks to Cuban-American design chief Alfonso Albaisa’s bold direction.

I park the Q60 at Lake Annecy to take in its lines. My car is painted ‘super metallic’ red, with an enhanced finish that makes it sparkle under the sun like jewel. There is a lean muscularity to this coupe’s silhouette. Albaisa has spoken of design language echoing that of a ‘bionic cheetah’ and you can see that here, but there is also restraint in the features which make it elegant rather than aggressive. There are also key signatures such as the crescent-cut c-pillar, which looks a little finicky, and the oversized double-arch grille which is inspired by a Japanese bridge reflected in the water. It’s a terrific expression of power.

The red letter ‘S’ on this car’s tail hints that this is no idle boast. Its 3-litre twin-turbocharged V6 is a beauty, producing 400bhp. That puts this car straight into the premium sports coupe category, with 38 more horses than the similarly-priced Mercedes-AMG C43. But it’s more of a motorway express than a switchback superhero. The steer-by-wire, which was first introduced on the 5-Series-rivalling Q50 saloon, has been recalibrated in the Q60 to deliver more tactile feel. The electronic reactions are instant, the steering well-weighted, but it doesn’t communicate the road surface like a traditional rack-and-pinion system. This actually makes it more relaxing when cruising, but less satisfying when threading one’s way through a mountain pass. The emphasis is on refinement over sportiness, with adaptive suspension, all-wheel-drive and a seven-speed auto ‘box keeping things ultra-civilized.

There are impressive safety features too, such as radar-guided cruise-control that looks two cars ahead to detect slowing traffic, and Active Trace Control which is a brake-assisted torque vectoring system designed to keep the car pointing where it’s supposed to.

Inside it’s well-equipped but, like so many Japanese lux-mobiles, a bit too busy and generic. And the materials feel more ‘premium American’ than German. The rear headroom is very limited, but up front you’ve got plenty of comfort and visibility. The acoustics, which were designed in collaboration with Bose at the concept stage, are excellent and the 13-speaker performance can rival any sound system this side of the Rolls-Royce Wraith’s. There’s active noise cancelling to ensure that when you just want peace and quiet you can’t hear any wind or tyre noise.

With Matt Monro’s On Days Like These providing the soundtrack (I can’t come to the Alps and not pretend I’m driving in The Italian Job’s opening sequence) I arrive at La Croix-Fry, my chalet hotel overlooking the Aravis Valley. It’s been kept in the same family since it was built in 1939, soothing skied-out limbs with their soft sheepskin sofas in winter and serving freshly foraged mushrooms to visiting foodies in summer. My room could belong to Hansel and Gretel, with thick wooden walls and rabbit fur cushions. Its private terrace has a panoramic view of Mont Charvin and is big enough for a game of five-a-side. The air is crisp and pure.

Isabelle Loubet-Guelpa is our immaculately quaffed hostess and her brother, Eric, oversees their award-winning restaurant. Cute crockery abounds and, after an exquisite feast finished with the promised Reblochon and a homemade Toblerone mousse, it’s time for the digestif. Génépi, an herbal liquor which the locals love, arrives on a bed of snow. The fireplace crackles as the warming liquid slips down, and I start to wonder; who’s the Infiniti aimed at?

I reckon that Infiniti is the new Saab. Hear me out: There’s something independent and a little avant-garde about this car. It feels progressive yet discrete. It would almost certainly vote for the Liberal Democrats. There is a gap in the market for a luxury car brand that is less flashy than BMW, less stuffy than Mercedes, less arrogant than Audi. This is it. Infiniti is the thinking person’s car brand.

The BMW 440i is a more involving drive, but as a sub-£50k luxury two-door the Q60S is a convincing alternative. It’s also going to be a lot rarer on UK roads and, I venture, it is better looking than its rivals.

Infiniti has found a design language that sets it apart from the likes of Lexus to create a genuinely desirable brand. All it needs to do is eke out a little more soul from the driving experience, which is something they’re collaborating on with the Renault F1 team.

I return the car to Geneva airport and hop aboard an Airbus home. Similar steer-by-wire technology up front. I wonder if the pilot wishes he were flying a fighter jet, though. If he does, he’d do well to check out the BMW.