City AM Bespoke: Return of the Mac 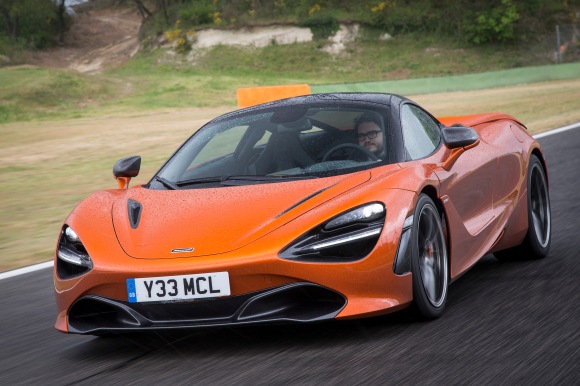 My suite at Rome’s Cavalieri hotel came with a Lamborghini. I wonder if they’ve noticed it’s missing, like the toiletries I always pilfer.

It’s a step above the usual executive-level privileges of a free mini bar, complimentary cake or a spa treatment. Perched upon 15 lush acres overlooking the ancient ruins and celebrated domes of Italy’s capital, birdsong and the distant beeping of horns were muted by the cacophonous howl of a Sant’Agata-built V12. When you think that hotels usually limit their TV sets to a maximum volume, so as not to penetrate your neighbour’s wall, they totally forgot to dial the Aventador S down from 11.

Oily bodies tanning around the azure swimming pool bolted upright as the Lamborghini barked angrily, shattering the peace and quiet they’d come in search of. But this is Rome, a city which cheered on chariot racers – the original Formula One – two millennia ago. The Romans still love speed and lethal aggression, and that is the Aventador in a carbon-fibre nutshell. A sculpture of carnal lust and athleticism sketched by the inmates of an insane asylum.

I roared out of the Cavalieri’s gates and headed down the hill to Vatican City. Supercars are a religion here. Nuns stopped to have their picture taken with the Lambo. The Polizia directed our convey past their cop shop and told us to rev the engine for their colleagues. If we let him have a spin around the block, said one officer, I’d have a get-out-of-jail-free card in Rome for life.

That’s definitely worth bearing in mind, as this was my second trip to Rome in as many months and, given the quality of wheels I’ve blagged, my driving licence is surely under threat.

Reverse via the postbox-size rear window into early summer; once again we find ourselves at the sumptuous Cavalieri. This large resort-style hotel is part of the Waldorf Astoria collection. Opened at the same time La Dolce Vita was in cinemas, its somewhat inelegant 1960s exterior belies the gilded furnishings, vast art collection (they claim it’s the largest of any hotel in the world, with an 18th century Tiepolo, situated in the lobby, among its 10,000 works) and one of Europe’s top-rated spas within. George Clooney calls it home when he’s in town, and Serena Williams met her baby daddy on the terrace. The top floor is home to Rome’s only three-star restaurant, La Pergola, boasting panoramic views of the city. The clubby atmosphere and dishes from Heinz Beck’s kitchen were a big hit with Michelle Obama when she visited. Next door to the dining room is the penthouse suite which Leonardo di Caprio once occupied for three months. It includes huge sofas taken from Karl Lagerfeld’s Paris apartment and four of Andy Warhol’s dollar-sign screen prints hanging in the bedroom, in case you need a visual illustration of the nightly rate.

On the opposite side of the restaurant sat another valuable artwork; the McLaren 720S, which had been craned onto the roof of the hotel in anticipation of our arrival. This was to be the world’s first media test drive of a car that promises much.

The 720S is McLaren’s new Super Series headliner, taking over from the 650S and 675LT. Both of those were of already anaemic in weight, and at 1,283kg the 720S has been in the bathroom for a suspiciously long time. Rapid evolution means not only is this car lighter than its forebears, it’s twice as efficient aerodynamically and has class-leading emissions.

So, it’s an eye-popping supercar from the cockpit, but does it look like one kerbside? I found its predecessors a bit too restrained and nerdy-looking. How does it compare in context to the child’s drawing that is a Lamborghini?

This is – and I’m including the iconic F1 when I say this – by far the sexiest-looking McLaren we have ever seen. It is stunning; the flowing lines, the floating 3D architecture, the forward-sitting glasshouse. Visually, this is the most perfect supercar shape we’ve seen since the Aventador first growled onto the tarmac in 2011, and the detailing is all the more impressive. In fact, it makes the rakishly handsome Ferrari 488 look ordinary. If this McLaren drives as beautifully as it looks, then this is the best sports car in the world.

And I’m thrilled to report that it is mission accomplished. Having slipped under the Azores Orange swan-like door, got my hands on the grey Alcantara steering wheel and swept out of the hotel I started to get a feeling for the 720S’ tractability. As a road car, it is as smooth as a bubble bath with David Niven. When you want to drive dynamically it powers you from corner to corner so quickly and serenely that your brain barely registers the breathless digital speedo or the anchorage supplied by the standard-fit ceramic brakes.

A truly jet-set hypercar owner knows that a supercharged door wedge is wasted on boulevards and rents his or her own private track. Vallelunga, scene of the Rome Grand Prix in the 1960s, is terrifyingly fast but the 720S fills its driver with confidence, so much so that within five laps I’m leaning on the limits of adhesion. Those limits are truly staggering.

Sunk into the bodywork at standstill, the full-width active aerofoil rear wing and air brake the size of a whale’s tail help to plant the car at speed in such a way that you’d swear it has four-wheel-steer, like that which the latest Aventador S boasts. But McLaren’s aero solution is even more effective. Enter a corner too fast and just let off the gas; the Variable Drift Control will correct your line without traction-nannying, tighten the nose into the apex and give you a smorgasbord of thrilling emotions; control, feel, excitement and relief. This is a supercar that rewards and flatters the pilot in equal measure.

McLaren Automotive’s rapid rise to producing the supercar by which all others should be measured is astounding. Founded just seven years ago, it has been profitable since 2013. Production is rising to over 4,000 units a year and a stable of Ferrari-thrashing cars is taking shape, thanks in no small part to the 30 percent of profits that are invested into the company each year. Between 2017 and 2022 they plan to invest £1 billion in R&D and release 15 new models. Most enticing is the forthcoming Ultimate Series car, codenamed BP23, which is the spiritual successor to the Gordon Murray-designed 1992 F1 three-seater. Like the F1, just 106 units will be built, and all have been sold already at £1.6m a pop, plus taxes. Those customers that were accepted can break open the vintage bubbly and light their finest cigars, because if second-hand values match those of the F1, which was originally priced at £535,000, they’ll be able to buy a mansion in The Boltons with the profits.

In a very short space of time McLaren has established itself as Ivy League. I look at it thus; Ferrari is the legacy student from a grand old family. McLaren is the suburban swot that’s there on academic merit. But with a car as capable and, critically, as stylish as the 720S it won’t emerge from Freshers’ Week with its virginity intact.

Lamborghini, on the other hand, is on a sports scholarship. The college jock; crude, loud and, historically, a bit thick. But it does brute force unbelievably well. If you can only drive one supercar in city traffic, this is the one you want.

First gear selected and throttle buried into July; Waldorf Astoria is rewarding their loyal clientele with a selection of driving events at properties around the world, and for my latest stay at the Cavalieri a truck full of Lamborghinis showed up, including the updated Aventador S, hot off the production line.

These Driving Experiences are free to a lucky handful, with Lamborghini handing the keys to guests to drive round for half an hour or so. That mightn’t be enough for a proper road test, but it would give me a chance to get a feel for McLaren’s most extrovert rival and see a bit more of the city than I did last time.

At £260,000, it’s more expensive than the McLaren and, at 217mph, it’s slightly faster at the top end. It boasts a jaw-dropping 730bhp, but without the exposed ribs of the 720S its acceleration is precisely the same.

The 720S is like a perfectly chilled glass of Chablis Grand Cru; light and complex, from a lean year. The Aventador S is a double tequila slammer. Lamborghini owns the archetypal hypercar silhouette; if Charles Manson studied CAD design, his ‘family’ may very well have comprised the Countach, Diablo and Murcielago. The Aventador continues the madness. McLaren might be more demure by nature but it’s come out of its shell riotously with the 720S. Both cars sear the senses and both stopped the traffic in Rome. Pedestrians cheered, whooped, and wrestled with their camera phones.

I’ve been lucky enough to drive all the fruity offerings from Ferrari, Aston et al, but this was the first time I’d ever driven a Lamborghini. The McLaren, I would wager, is lightyears more accomplished on the track. But the Aventador’s naturally aspirated 6.5 litre V12 – a dinosaur surely set for extinction – was utterly addictive. I barely managed to get out of third gear as we threaded our way around Byzantine and ecclesiastical landmarks, but the exhaust overrun crackle, reminiscent of fire-powered flatulence, was joyful and hilarious.

This wasn’t a head-to-head comparison test, merely an unforgettable experience laid on by the hotel. We lined our fleet of angular machinery in view of St Peter’s Basilica, on the Via della Conciliazione, and, encouraged by Lamborgini’s test driver at the front of our attention-grabbing queue, hit the throttle in ‘park’; 12-cylinders exploding at 9,000RPM, blue flames popping from the exhausts. The nuns were mad for it. When I pulled away, white smoke billowing from the rear wheels, they probably thought a new pope had been elected. Amen.

The twin-turbo McLaren sounds more baleful; like Satan sucking unleaded through a straw. The Lamborghini is a straight-up apocalypse; dogs and cats living together, mass hysteria.

The 720S is the best supercar I’ve ever driven. The Aventador S is the most fun, even with the handbrake on. My advice, if you’re in the market: Buy the McLaren, then stay at a Waldorf Astoria and borrow the Lambo. And, if you take my shameless approach with the in-room amenities, maybe don’t give it back.