The Sunday Telegraph: Going on holiday by mistake in a Jaguar F-Pace 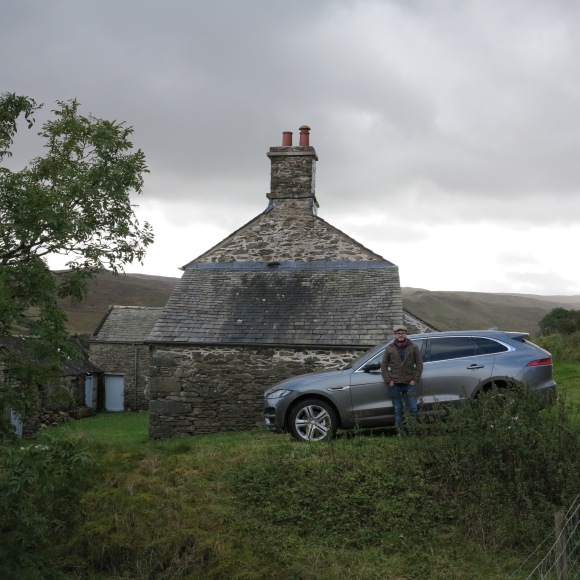 As I thunder north up the M6, I am fulfilling a mission 30 years in the making. I’m at the wheel of a Jag and the destination is Uncle Monty’s cottage. I am re-enacting Withnail & I. In this most quotable of cult movies (seared upon the collective un-consciousness via collegiate drinking games), Richard E Grant and Paul McGann arrived in Cumbria during a deluge in a Mk II Jaguar, which had just one working headlight and a capricious windscreen wiper. Our F-Pace is working perfectly and its bodywork is unblemished, yet the weather is similarly soaking.

I had tracked down the owner of ‘Crow Crag’ – known to the postman as Sleddale Hall – and secured an invitation. We scythe off the motorway just south of Penrith and take the A6 along the national park’s easterly border before turning onto an unnamed road between the tiny hamlets of Shap and Wickersgill. After a few miles we reach a farm, its gate closed to keep in sheep. A farmer clambers off his quad bike and unbolts the barrier – “Are you the farmer? Stop staying that, Withnail!” – before issuing a friendly warning that the Jaguar mightn’t make it up the steep and rocky track to our destination. He needn’t worry, because the F-Pace’s all-wheel-drive uses Intelligent Driveline Dynamics, which shifts traction from the rear to the front wheels and scrabbles across Sleddale Hall’s challenging approach with effortless composure. My concerns that this car would prove to be the Land Rover Discovery’s emotionally soft city-slicker cousin vanish in an instant. It can properly off-road.

Sleddale Hall overlooks the Wet Sleddale reservoir, which was built in the 1960s, and beyond that the emerald green hills of the Lake District rise majestically. The house looks much as it did when it posed in the film, save a lick of blue paint on the woodwork and rust-coloured stone surrounds. Etched in the walls of the courtyard are quotes from the film left by visiting fans. The owner, a restoration architect by profession, seems pretty relaxed about it.

Having ticked the movie location off the list we trundle back through the farm and deep into the fells in search of the stirring landscapes that inspired William Wordsworth, Samuel Taylor Coleridge and, indeed, Montague Withnail.

We skim the hedgerows north, taking the Wideworth Farm Road, cutting through the handsome village of Askham and passing Lowther Castle. At Pooley Bridge, on the B5320, we’re confronted with Ullswater, said to be the most beautiful lake in England. Here, as well as a four-poster bed, our room at the Sharrow Bay hotel boasts the most incredible view across the water to the tall ridges and dome-shaped fells that surround it. The hotel’s small wooden jetty is almost submerged as the wind kicks up. According to a framed letter in reception thanking the management for the loan of a towel, David Cameron once took a swim here. This got me thinking; does the Prime Minister have to write a letter every time they borrow a pen or ask for a tissue? It must be exhausting.

As well as the vista, another item of note is the Sharrow Bay’s dessert menu. It was here, fifty-odd years ago, that the Sticky Toffee Pudding was invented.

I was surprised to find Malcolm Wilson in the hotel’s lounge entertaining some close chums. The boss of racing team M-Sport, Wilson hails from nearby Cockermouth where he builds and preps his hugely successful WRC Fords and Blancpain Bentleys within, of all places, a former psychiatric hospital. It’s not only apt that Wilson should feel at home in a nut house, but that the Lake District’s glorious roads first inspired his need for speed.

While we’re on the subject; Donald Campbell set the world water speed record on Ullswater in 1955, at an average speed of 202.32mph. He would die in 1967 at nearby Coniston Water trying to go faster still. His body was recovered in 2001, and being something of a graveyard tourist I set the Jaguar’s sat-nav for Coniston. We whip south through the valley towards Windermere, the Lake District’s main hub of activity, turning right across the Troutbeck Bridge along the A591 before climbing the B5286, which has the most magnificent views of Lake Windermere and the formidable gothic revival mansions found on its shore.

Campbell’s headstone is easy to spot; there’s a bluebird on it. Continuing the theme of mortality on the way back, we turn left at Ambleside and take the A591 to Grasmere to visit the 14th century St Oswald’s church and the final resting place of poet Wordsworth.

Grasmere is home to the Michelin-starred Forest Side, which was another box I felt compelled to tick. I’m fairly confident in writing that, per capita, the Lake District has more Michelin-awarded restaurants than Tokyo, Paris, New York or anywhere else. First, I wanted to start with the most famous, the two-star l’Enclume. Located at the bottom of the national park, it’s an hour’s drive from Grasmere to Cartmel along the A590 towards Morecombe Bay. En route, the scenery goads me to swing the F-Pace away from the A-road and up into the Rusland Moss nature reserve. I turn the driving dynamics knob to the setting with a picture of a car doing things I’d never dare. Despite my hesitation, though, the F-Pace rewards bravery and traverses the steep and wild terrain often with only two wheels on the ground. There are no warning buzzers or rev counter hysterics; the IDD sorts it all out and we arrive at l’Enclume without having muddied our shoes.

In Withnail & I, they had to kill their lunch before they could eat. I’Enclume’s Simon Rogan does this job for me with considerable flair. In the interests of brevity, I shan’t list the full 17-course feast, but highlights include a beef dumpling in broth so flavoursome it’ll cause involuntary spasms, and veal so tender you could cut it by blowing on it. In short, I’Enclume lives up to the hype.

We finish lunch at 4pm. It’s only a few hours till dinner at Forest Side and I’ve already loosened my belt once. Another tasting menu, another ten courses. We are in danger of becoming human foie gras, force-fed the finest food in the land. Fortunately, we’ve moved from the Sharrow Bay and will sleep above the shop tonight, so to speak. Forest Side offers contemporary luxury accommodation within the confines of a Victorian manor and, delighting its epicurean guests, l’Enclume alumnus Kevin Tickle uses his foraging skills to produce an innovative menu inspired by the Cumbrian landscape. The ingredients all come from the garden and nearby fields, lakes and sea; pig’s tail, venison pastrami, langoustine, cod, oyster, rare-breed pork – each course more succulent than the next. Twenty-seven dishes down, and untold glasses of paired wine, I suffer a full-on food coma.

I stumble out of bed in the morning and throw open the windows to inhale the country air. Fluffy Herdwick sheep – introduced to these fells by the Vikings – race across the field below. After all of yesterday’s posh-nosh we go in search of an earthy pub, the sort of place one might meet a poacher with an eel secreted down his trousers – “Don’t threaten me with a dead fish!” – and farmers popping in for a lunchtime pint.

I steer the F-Pace towards the Kirkstile Inn; an adventurous location tucked away to the northwest of Buttermere, near the little-visited lake of Loweswater. The Whinlatter Pass provides captivating views of Grisedale Pike, and the B5289 that leads to the pub takes in the mountain of Grasmoor. The Jaguar is keen in the bends and its 3.0 diesel’s 295bhp powers us between the fells as smoothly as Uncle Monty’s Silver Wraith Rolls.

Rickety old furniture, worn carpets and excellent home-brewed ale await at the Kirkstile. Despite Cumbria going up in the gourmet world, you can still find a proper old-school boozer. The Withnail atmosphere is in abundance.

Like our heroes, there comes a time when one must return to London, and the Jaguar will devour the journey eagerly. “Come on lads”, Monty would say, “let’s get home; the sky’s beginning to bruise. Night must fall and we shall be forced to camp.”