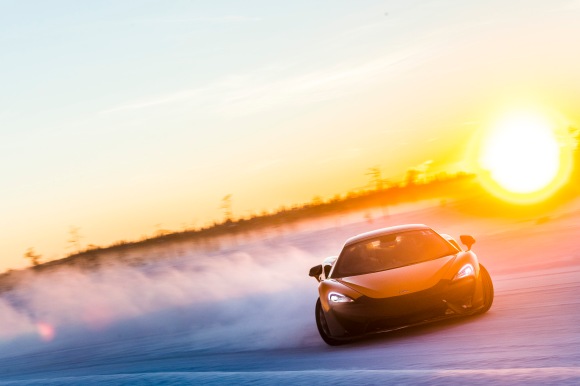 I’ve been promised 567 horsepower, but first I get to experience the propulsion of seven huskies scrambling through the forests of northern Finland as I hang onto a rickety two-man sled, zipped up against the Arctic cold. We arrive at McLaren’s kota, a traditional wooden hut 2,000 miles as the crow flies but more realistically a million miles from the automotive group’s space-age Technology Centre in Woking. Inside, around an open fire, our lunch of wild salmon is grilled, and we wrap ourselves in reindeer skins for warmth while the supercars are prepped in their snow-capped hanger.

These are not the standard optics for a drivers’ briefing, but then this is no ordinary drive event. McLaren’s Arctic Experience is designed for their most committed customers and those hungry for four-wheeled helmsmanship to improve their skills in an environment of adventure and exclusivity.

Over four days, with two spent at a sprawling ice driving facility, McLaren will treat you and a guest to gourmet food and wine, sumptuous lodgings fit for a president (literally), and loan you a professional racing coach in addition to a 204mph McLaren 570S, in order to get the best out of yourself as well as this state-of-the-art bit of kit. The price: £15,000, all in.

That’s not a sum to be sniffed at, but everything about this trip is unforgettable and should qualify for even the most spoilt billionaire’s bucket list.

We’re 200 miles deep into the Arctic Circle. As well as spruce, larch and fir trees, barbed wire fences and high security surround the Test World proving ground; 500 hectares of frozen lakes and alpine flats that entice many of the world’s premium car and tyre manufacturers to take their products and prototypes to the edge by sliding around specially constructed snow and ice tracks.

McLaren have 14 separate courses at their disposal, all individually designed to discover the power and agility of their machinery. Over the two days I spent around 20-30 minutes driving around every one of them. My instructor is 30-year-old Brit and champion racer James Littlejohn. For each track, James gives me a demo and then hands over the reins. Ducking under the dihedral door and clipping in, every outing comes with a wave of adrenalin that’s as addictive as the motoring itself. I’ve done a fair amount of ice driving before, including in Ferraris and Porsches, but this is the first time I’ve taken out a mid-engined RWD supercar with Nordic spikes. The result is tricky but all the more rewarding.

Such is the sublime balance of the 1,440kg 570S Coupe and 1,486kg Spider, as well as the tractability of its twin-turbo V8 and crisp gearbox, one quickly builds confidence as you learn to turn with the throttle and power through switchback corners in effortless pendular drifts. You know you’re getting it when you barely have to turn the wheel, although you learn to be telepathic with your reactions and saw at the steering when you have to. It becomes like a furious dance; a 600 Newton Metre ballet of torque and bluster.

You learn to see through corners far ahead and use the car’s weight transfer to rotate it towards each apex, patiently waiting for the nose of the car to bite without leaning too hard on the loud pedal. For corners where a more aggressive turn-in is required, I’m taught to execute a ‘Scandinavian Flick’, where you flick the steering one way in order to loosen the rear, then quickly rotate the other way so as to neatly and tightly negotiate a hairpin.

We begin on the smaller circuits; some ovals and circles, others resembling a dog’s bone, before moving onto the handling and ‘dynamic’ circuits, which are longer and more physical. The low-lying sun is about to bid adieu but fortunately, unlike all the other ice driving programmes I’ve done, we have a second day in the hot seat and a night to sleep on it and consider all that I’ve learnt. For hours afterwards, rather like the swaying feeling you get after disembarking a ship, I sense the floor shuffling under me this way and that.

Our accommodation is the Jávri Lodge in nearby Saariselkä. We’d flown into Ivalo, via Helsinki, and made the half-hour drive south in a fleet of blacked-out Mercedes MPVs. The presidential-style motorcade seems apt, given Jávri Lodge was once the holiday home of Urho Kekkonen, Finland’s longest serving premier. Once a place of reflection and negotiation during the most politically turbulent times between East and West (Finland borders Russia and Kekkonen was president throughout the majority of the Cold War), it’s now a 13-bedroom boutique hotel designed to restore skied out and overdriven limbs. It feels very much like a private home, all the more so given McLaren rents its guests the whole thing (the individual room rate usually runs to £2,610 for three nights).

Though built fifty years ago, the luxury cabin’s interior is at once boldly contemporary and at one with its surroundings. In the living room is a grand piano, a roaring fire, and a well-stocked bar to which you’re welcome to help yourself. There are also two saunas and, depending on how adventurous you are, there’s either an indoor pool or soft snow outside to cool off afterwards.

The food is spectacular; between four and six courses of stunningly creative farm-to-table cooking each night, and for the third a trip to Laanilan Kievari; a traditional-style restaurant run by a mother and son team, who laid on one of the finest food and wine pairings I’ve ever enjoyed. Highlights included reindeer carpaccio with a sparkling rosé, roasted king crab with lemon butter and a glass of Riesling, and peppery elk tenderloin with pinot noir.

Another major draw to the area are the Northern Lights which can be seen on a clear night; gaseous particles in the Earth’s atmosphere colliding with charged particles released from the sun create ghostly green, yellow, red and purple flares in the sky. It’s basically Mother Nature’s answer to The Cure’s concert lightshows.

In such cinematic surroundings, I started to think about automotive brands in the context of modern film directors. Ferrari is Ridley Scott. Lamborghini is Michael Bay. McLaren is like a Christopher Nolan movie; narratively complex, technically innovative, brooding and atmospheric, and authentic rather than reliant on CGI. This is all exactly what I want from a supercar. It suits the icy location, but there’s real soul in the way it goes about its business.

We return to our kota the following morning ready to push things forward in the driving stakes. After a few more sessions on the handling circuits, James and I head to the ‘GP Stage’, a giant 2.5 mile race track cut into the forest. With a particularly long straight, the speeds one is capable of here are potentially perilous. I’d already managed to dislodge two front bumpers against the ice walls of the smaller courses (the front end of a 570S quickly becomes a snowplough if you take a corner too tightly), and I had one very high-speed spin which resulted in me needing a tow out of a snowbank. But this is normal, and the instructors and mechanics were very patient every time I required new bodywork.

So, to the GP Stage. By this time, visibility was poor. The dimming light made it difficult to differentiate the track from the snowbanks. Every so often, we would rubberneck at another McLaren beached with its wheels in the air. But on we pressed, James giving me instructions like a rally co-pilot – left hairpin brake, fast right more throttle, give it a ‘Scandi-flick’ here, watch the trees – and the McLaren and I emerged from our 20 lap marathon completely unscathed and with a tremendous sense of achievement. Sideways at 60mph through the snow had become as relaxing and regular as a pootle to the shops.

Monty Python wrote a song about Finland. Michael Palin, himself no stranger to adventure, sang of the country’s lofty mountains, tall trees and pleasurable pursuits; pony trekking, camping, or “just watching TV”. Finland, he concluded “has it all”. For petrolheads and anyone who fancies driving a McLaren, it most certainly does.

For more information on McLaren Automotive’s track driving programmes and to register for the 2019 Arctic Experience visit cars.mclaren.com/experiences/pure-mclaren